This is not a full game, but instead a brief set of notes for people who wish to run Numenera content using Into the Odd. It does not use the Cypher System or any specific game mechanics; instead, it focuses on converting creatures and considerations for cyphers & character advancement.

Into the Odd is (c) Chris McDowall.

Numenera and the Cypher System are (c) and (TM) Monte Cook Games, LLC.

It's technical and packs a *lot* of info into the page, but it's surprisingly easy to read and digest, and it's a very thorough, very intuitive conversion kit.

Of note, the advancement rules are a little bit closer to Numenera's than ITO's, and they make character growth much more granular. As a result, even if you're not interested in running something set in the Ninth World, if you want to do a long ITO campaign with a focus on more than just dungeon-crawling, you may want to use this conversion.

Similarly, the Expend Effort rules in FNITO would make a great addition to the base Into The Odd game if you want players to have more agency and be a little less at the mercy of the dice.

Overall, this is a really cool conversion kit, and I strongly recommend it to Into The Odd players and Numenera setting fans alike. 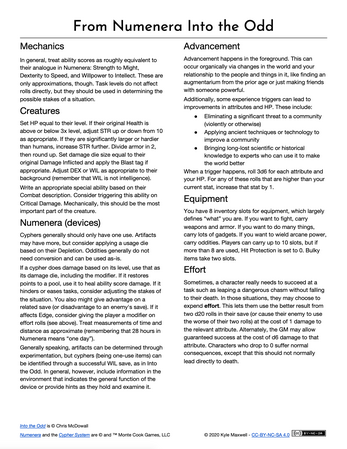